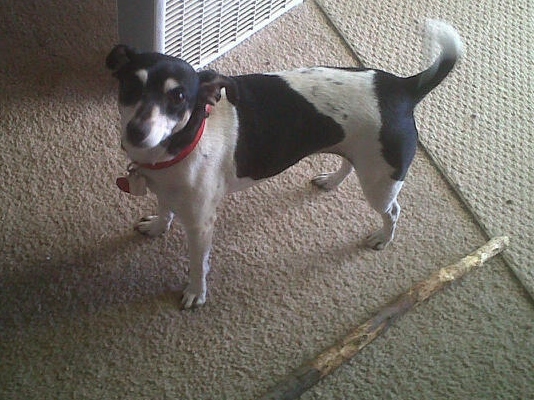 By janetnelsonDecember 22, 2014Adoptions
No Comments

Gypsy is a seven year old Rat Terrier who needs a new home.
She had her teeth cleaned a while back, is current on vaccinations, and is on heart worm preventative. Gypsy has summer allergies that are managed with Benadryl. She is on a diet of fish and potato kibble.
For the last four years, Gypsy resided in a home that took in foster dogs. She got along quite well with all the foster dogs who came into the household, until a few months ago, when she began fighting with a female Miniature Pinscher she had previously gotten along with. Gypsy does not fight with the other resident dogs, who are males. The fighting between Gypsy and the female Min Pin began when a new male dog was brought into the home. The owner would give up the new male dog; however, she fears that removing the male would not solve the problem of Gyspy fighting with the Min Pin. The owner has worked with this problem for several months, but there has been no resolution.
Gypsy is now in foster care, and is up for adoption. Her ideal home would be with an older woman who wants a lap warmer. Gypsy wants nothing more than to be with her person. If you’re interested in Gypsy, please contact her foster person at: [email protected]

A Little Poodle To Brighten Your Life!