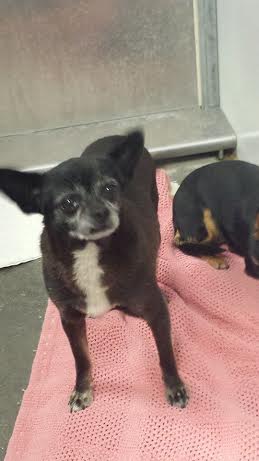 Mickey is a middle aged Chihuahua who was running out of time at a shelter in Kansas. The good folks at the shelter did not want him to be euthanized, due to lack of space at the shelter. So, they sent out the word to various rescues, asking for a commitment by December 31, 2014, to take little Mickey. As of December 29, no rescue had made that commitment, so Evergreen Animal Protective League stepped up to claim him. Mickey arrived in Denver on January 3, 2015. What a happy new year for Mickey and for us!! Mickey is current on vaccinations, including rabies, and will be getting neutered and have his teeth cleaned on January 14. He will then be available for adoption about ten to 14 days later, once he’s recovered from his neuter. He is very good with other dogs. He’s a bit shy at first, but once he knows you can be trusted, he will not hesitate to snuggle with you. If you are interested in meeting Mickey, please contact Janet at [email protected] or 303 466 2459.