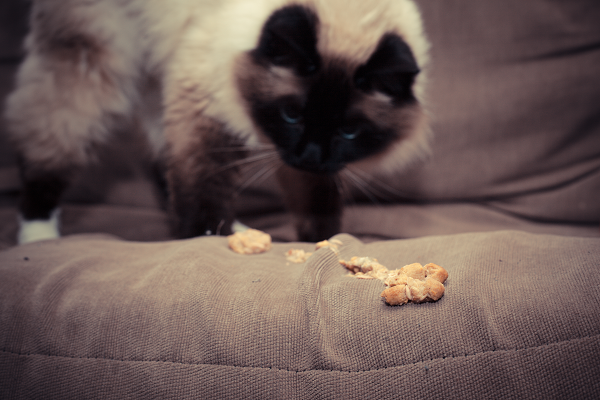 What is inflammatory bowel disease?

Inflammatory bowel disease (IBD) is a syndrome rather than a disease. The syndrome is caused by a specific reaction to chronic irritation of the stomach or intestines. Inflammation is the body's response to an insult, injury, or foreign substance. With inflammatory bowel disease, specific types of inflammatory cells, depending on the type of IBD, invade the wall of the stomach and/or intestines. As inflammatory cells invade, the lining of the gastrointestinal (GI) tract thickens. This thickening makes it harder for your cat to absorb nutrients and move food along the GI tract.

There are many causes of inflammatory bowel disease; however, the cause is often unknown or undetermined. Possible causes include bacterial infection, parasitic infection with worms or single-celled parasites, or an allergy or intolerance to a specific protein in the diet.

What are the clinical signs of IBD?

IBD can involve any part of the GI tract but most commonly affects the stomach and/or the intestines. If the stomach is involved, your cat will experience chronic vomiting. This is the most common clinical sign of IBD in cats. If the intestines are involved, chronic diarrhea will occur. In some cats, both parts of the digestive tract are involved so both vomiting and diarrhea occur.

"In some cases, cats develop a ravenous appetite because they are unable to absorb the food they are eating..."

If the syndrome lasts for more than a few months, poor appetite and weight loss are common. In some cases, cats develop a ravenous appetite because they are unable to absorb the food they are eating, and this must be differentiated from hyperthyroidism.

Vomiting hairballs more than once a month is not normal and represents your cat's inability to pass the hair through his GI tract and may be a sign that he has IBD.

How is IBD diagnosed?

Inflammatory bowel disease can be highly suspected through the use of ultrasound. Ultrasound can measure the thickness of the stomach and intestinal linings, as well as evaluate the size of the lymph nodes around the intestines. The specific type of IBD is conclusively diagnosed based on tissue biopsies. Obtaining these samples is a surgical procedure requiring general anesthesia. Depending on the suspected location of the IBD, your veterinarian may recommend either an endoscopic procedure or a full abdominal exploratory surgery.

If the small intestine or the upper large intestine is suspected to be involved, the procedure will require exploratory surgery, primarily because these areas are not accessible to an endoscope. In this case, it is common to take samples through all the layers of the wall of the affected organ. If it is mainly the stomach or colon that is affected by the condition, tissue samples can be obtained using an endoscope. When an endoscope is used, a tiny biopsy instrument will be used to take small samples of the lining of the affected organ. The benefit of exploratory surgery is that full-thickness biopsies often provide better samples to make a diagnosis.

"The benefit of exploratory surgery is that full-thickness biopsies often provide better samples to make a diagnosis."

The tissue biopsies will be sent to a veterinary pathologist for diagnosis. The pathologist will give a descriptive diagnosis of the syndrome, depending on the predominant type of inflammatory cells present in the biopsies. The chronic irritation that causes IBD stimulates the body to send cells from the immune system to the affected area. IBD is diagnosed when these cells are identified at abnormal levels in the tissue.

Determining the cause of the tissue reactions usually requires further testing. Tests or treatments will be performed to rule out internal parasites, cancer, and infections. Blood tests to rule out problems with the kidneys, liver, and pancreas, as well as diseases such as hyperthyroidism and diabetes, are performed. In some cases, the exact cause cannot be determined.

Other tests that may be performed are:

How is IBD treated?

The ideal way to treat IBD is to diagnose the underlying disease that is causing the reaction. If an exact cause cannot be found, the disease is called “idiopathic”. Many cases of IBD are considered idiopathic.

Deworming. Broad-spectrum deworming is recommended as fecal tests are not always representative of the parasites in the GI tract.

Diet. Some cats with IBD will respond to a change in diet. This can be accomplished in one of two ways. First, a commercial food that contains a protein source that is new to the cat (what is referred to as a novel protein) or a hydrolyzed protein (where it has been broken down to smaller parts, so the body does not recognize it as a specific protein) is chosen. If that is not effective, a high-fiber diet is tried. A true food trial requires that the test diet be fed exclusively for eight to twelve weeks. In some cases, your veterinarian will recommend that you feed a true elimination diet, in which a home-prepared diet containing only a single protein and a single carbohydrate is fed. In all food trials, no treats or other foods may be given at all.

"A true food trial requires that the test diet be fed exclusively for eight to twelve weeks."

Vitamin B12. Supplementation with Vitamin B12 can be considered as most cats with inflammatory bowel disease are unable to absorb this important vitamin. This is most often given by injection under the skin.

Immunosuppressive Medications. If dietary therapy is not successful or is not possible to perform and no underlying cause can be found, medications are used to suppress the inflammatory reaction. Corticosteroids such as prednisolone (Delta-Cortef®, Prednis-Tab®), budesonide (Entocort®, Uceris®), or dexamethasone (Decadron®) are generally the most effective medications and are used initially. Other medications such as chlorambucil (Leukeran®) or azathioprine (Imuran®) are tried if corticosteroids are not successful on their own.

Do corticosteroids cause side effects in cats?

Corticosteroids are notorious for causing a variety of side effects in humans. The typical increased drinking, urination, and appetite are often seen at the beginning but longer-term use can affect the liver, increase the risk for diabetes, and cause thinning of the skin. To minimize any possible adverse effects, the goal is to use the lowest effective dose and to give it on an every-other-day schedule. It will be necessary to begin therapy with a high dose, but once a response to the medication occurs, the dose is gradually tapered to the lowest effective dose.

Does this mean that I will be giving steroids to my cat for the rest of his life?

Long-term therapy is required for most cats diagnosed with IBD. Generally, a cat is treated for a few months and then the medication is discontinued to see if it is still needed. If vomiting or diarrhea recurs, treatment is resumed. If oral medications are difficult to administer, it may be possible to give periodic injections of the long-acting corticosteroid, methylprednisolone (Depo-Medrol®). The main disadvantage of long-acting injections is that once the medication is administered, it cannot be removed from the body if there are any problems.

Are other anti-inflammatory drugs used to treat IBD?

Occasionally, metronidazole (Flagyl®) is used to help calm the inflamed GI tract. Unfortunately, this medication has a bad taste and can cause decreased appetite or vomiting during treatment.

What is the prognosis?

If a positive response occurs to a diet change, your cat can be maintained on the new diet for the rest of his life, provided the diet is appropriately balanced. If your cat responds to medication for stomach bacteria, the long-term prognosis is good. If a response occurs to corticosteroids, the long-term prognosis is also good if the administration of the drug is feasible. However, if there is no response to diet or corticosteroids, the prognosis is more guarded. In these cases, further testing is suggested to see if an underlying disease can be identified. Some forms of inflammatory bowel disease may progress to intestinal cancer. Chronic inflammation has been hypothesized as a cause of GI lymphoma in cats.

© Copyright 2022 LifeLearn Inc. Used and/or modified with permission under license.