Xylitol Is Dangerous for Dogs

Xylitol Is Dangerous for Pets

The U.S. Food & Drug Administration recently sent out a warning regarding dogs and Xylitol. While the FDA warning is for dogs, both dog and cat owners should know that Xylitol can be toxic to pets, even when the relatively small amounts from human products are consumed. If you suspect your pet has eaten a product that contains Xylitol, it is important to take the pet to a veterinarian immediately.

What is Xylitol?
Xylitol is a naturally occurring substance that is widely used as a sugar substitute. Chemically, it is a sugar alcohol, and found naturally in berries, plums, corn, oats, mushrooms, lettuce, trees, and some other fruits.

Commercially, most xylitol is extracted from corn fiber, birch trees, hardwood trees and other vegetable material. Although it has been used as a sugar substitute for decades, its popularity has increased dramatically in the last few years due to its low glycemic index and dental plaque fighting properties.

How is it used?
Xylitol is manufactured into a white powder that looks and tastes similar to sugar. In many countries it has been approved for use in oral care products, pharmaceuticals and as a food additive. Over recent years, the number and types of products that contain xylitol has greatly increased. Example products include sugar-free gum, candies, breath mints, baked goods, pudding snacks, cough syrup, children’s chewable or gummy vitamins and supplements, mouthwash, and toothpaste. Xylitol is also showing up in over-the-counter nasal sprays, laxatives, digestive aids, allergy medicines, and prescription human medications, especially those formulated as disintegrating drug tablets (sleep aids, pain relievers, anti-psychotics, etc.) or liquids.

Xylitol Reactions in Different Species
Xylitol causes a different response between humans and dogs. In people Xylitol causes little to no increase in insulin release or change in blood sugar levels while dogs have a large response to Xylitol.

Xylitol Toxicity in dogs
With our canine companions, Xylitol causes a marked increase in insulin release and drop in blood sugar – the basis for Xylitol toxicity. After a dog consumes a significant amount of Xylitol, there is a massive release of insulin from the pancreas. This, in turn, results in a dangerously low blood sugar level. At higher dosages, Xylitol can cause massive liver necrosis. This produces an acute health crisis and, in many cases, death.

Symptoms
Symptoms of xylitol poisoning develop rapidly, usually within 15-30 minutes of consumption. Signs of hypoglycemia may include any or all of the following:

How much is too much?
The dose of Xylitol considered to be toxic for dogs is 0.1 gram or more of Xylitol per kg of the dog’s body weight.

Example: An individual piece of gum can have anywhere from 0.3 to 1.15 grams of xylitol per piece.
If a pet finds a pack of gum and eats it, even the largest dog or cat is at substantial risk. 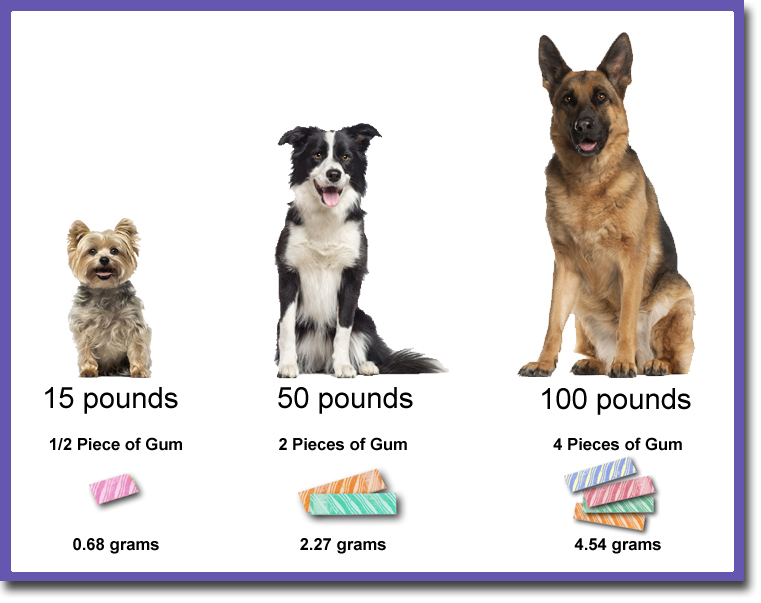 There are now over 700 products containing Xylitol. These include some peanut butters, cosmetics, power and protein bars, ice cream, syrup, drink powders, mouthwash, and toothpaste to name a few. The situation can become life-threatening in less than one hour.

See the name-brand listing at www.preventivevet.com/xylitol-products-toxic-for-dogs

What about cats?
Like dogs, cats also have a large insulin response to Xylitol. Cats typically are more picky eaters, and generally will not eat as much as dogs. Still, if you suspect your cat has consumed a product with Xylitol in it, call your veterinarian right away.